Required Cookies: These cookies are necessary to facilitate the correct navigation of our website and ensure that the content is loaded efficiently allowing the correct use of the different options or services that exist in it, such as the purchase process.

Marketing Cookies: They contain a unique randomly generated value that allows the Platform to distinguish browsers and devices. This information is used to measure the performance of the advertisements and provide recommendations regarding products based on statistical data.

Posted on2 Years ago

The purpose of this article is to give you a brief overview of the origins of the the origin of the air plants and take the opportunity to tell you a curiosity about our beloved plant SPA (Tillandsia usneoides or also called Tillandsia Spanish moss).


If at the end of reading the article you have doubts or you want to talk in the future about a specific topic, leave it in the comments

But let's start at the beginning. If you happen to fall into this article you should know that the Tillandsias or also called air plants are a genus belonging to the Bromeliad family. There are hundreds of different varieties, around 650 worldwide. In nature air plants grow on trees (epiphytes) or rocks (lithophytes). Do not be afraid, they are not parasitic plants, they only seek shelter from direct sunlight. Literally they are plants that feed from the airthey are very sensitive to humidity and airborne particles in the air. Obviously they need light but always indirect. If you want to know more, I encourage you to read, before continuing, the article what are the air plants?.


how much do you know about the origin of these curious houseplants?

The air plants they grow in the forests, deserts and mountains of Central and South America, Mexico and the southern United States. These plants probably developed in the Cretaceous period about 65 million years ago. Archaeological studies reveal fossil specimens dating back 30 million years, so air plants can justifiably be considered primitive plants.

It is said that the Incas, Aztecs and Mayans used virtually all parts of Tillandsia for food, protection, fibers and ceremonies. Because the plant can survive away from water, the botanist Carl Linnaeus decided to name them tillandsias in 1738 after the Finnish physician and botanist Dr. Elias Tillandz, who hated water.

According to legend, Tillandz ("Till lands" means "by land" in Swedish) changed his name from Tillander to Tillandz when, as a student, he traveled by ship from Turku to Stockholm. On the way he felt so seasick that on the way back, he decided to walk back around the Gulf of Bothnia, a distance of about 1000 kilometers. You can't say that scientists don't have a sense of humor.

Having said that, we would like to tell you a little more about our beloved plant SPA. Its scientific name is Tillandsia Usneoides. It is one species among the more than 650 varieties of these curious plants cataloged worldwide. The name comes from the enormous similarity between the Usnea (which is a lichen) and the Spanish moss (plant SPA). For this reason the great botanist Carl Linnaeus called it Tillandsias usneoides, which literally means "Tillandsias that resembles the Usnea osea a lichen".

And you are probably wondering... Why is Tillandsia Usneoides also called Tillandsia Spanish Moss? If it's not even moss and doesn't even come from Spain, why is it called that?


It is said that on the Gulf Coast near Alabama, Rufus Joseph Tillman told a version of the story to his great-granddaughter, Sherry Hicks

"The great Spanish explorer Hernando De Soto fell in love at first sight with the favorite daughter of an Indian chief. Although the chief forbade the couple to see each other, the Spaniard was seeing the maiden in secret. The father found out and had the Spaniard tied to the top of an ancient oak tree. The Spaniard had only to give up his love to be freed, but he refused to do so. The Indian chief forbade giving the poor Spaniard food and water. The Spaniard grew weaker and weaker, but he still would not give up his love for the girl. As the end drew near, the Chief insisted once more on taking him away from his daughter. But the Spaniard not only replied that he refused to give up his love, but that his love would continue to grow even after death.

The truth is that in Florida (United States) there is a city called Lauderhill where there is a street called Spanish Moss Terrace in reference to these plants. This is because there is a large concentration of hanging air plants (tillandsias usneoides). We have been able to rescue from google maps a location where they can be seen hanging from trees in the middle of the street.

The peculiarity of this air plant is that it has a very characteristic growth form. As we can see in the image on the right from its leaves grow new leaves and so on consecutively. As if it were a chain. And from time to time, from this chain comes out a small purple or greenish flower. It is important to note that they have exactly the same care and their reproduction is from the seeds that come out of their small flower or rather, their flowers as they make many over time 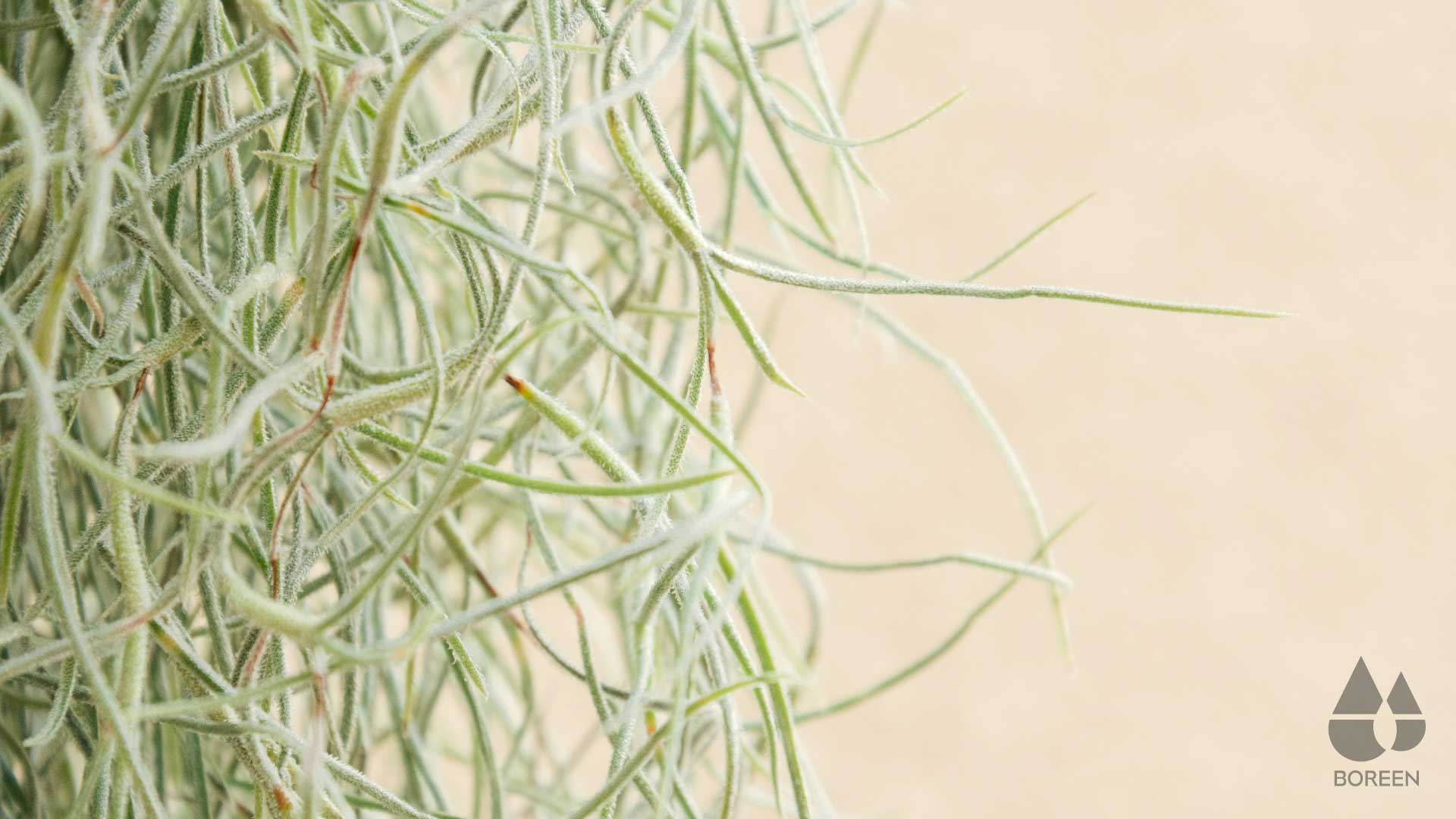 Another curiosity about tillandsia usneoide is that the vascular bundle is surrounded by a mass of thick-walled sclerenchyma that produces a tough elastic fiber that has long been used in the southern U.S. In fact, in the early 20th century, wild tillandsia usneoides were harvested on an almost industrial scale and used in the upholstered seats of luxury trains, buses, airplanes, and yachts. Even the seats of early Ford Model T automobiles were filled with these strong, elastic fibers. A rather peculiar use, isn't it?

If you found this article interesting we encourage you to give us your opinion in the comments and, if you want us to talk about any topic related to tillandsias or BOREEN don't hesitate, let us know 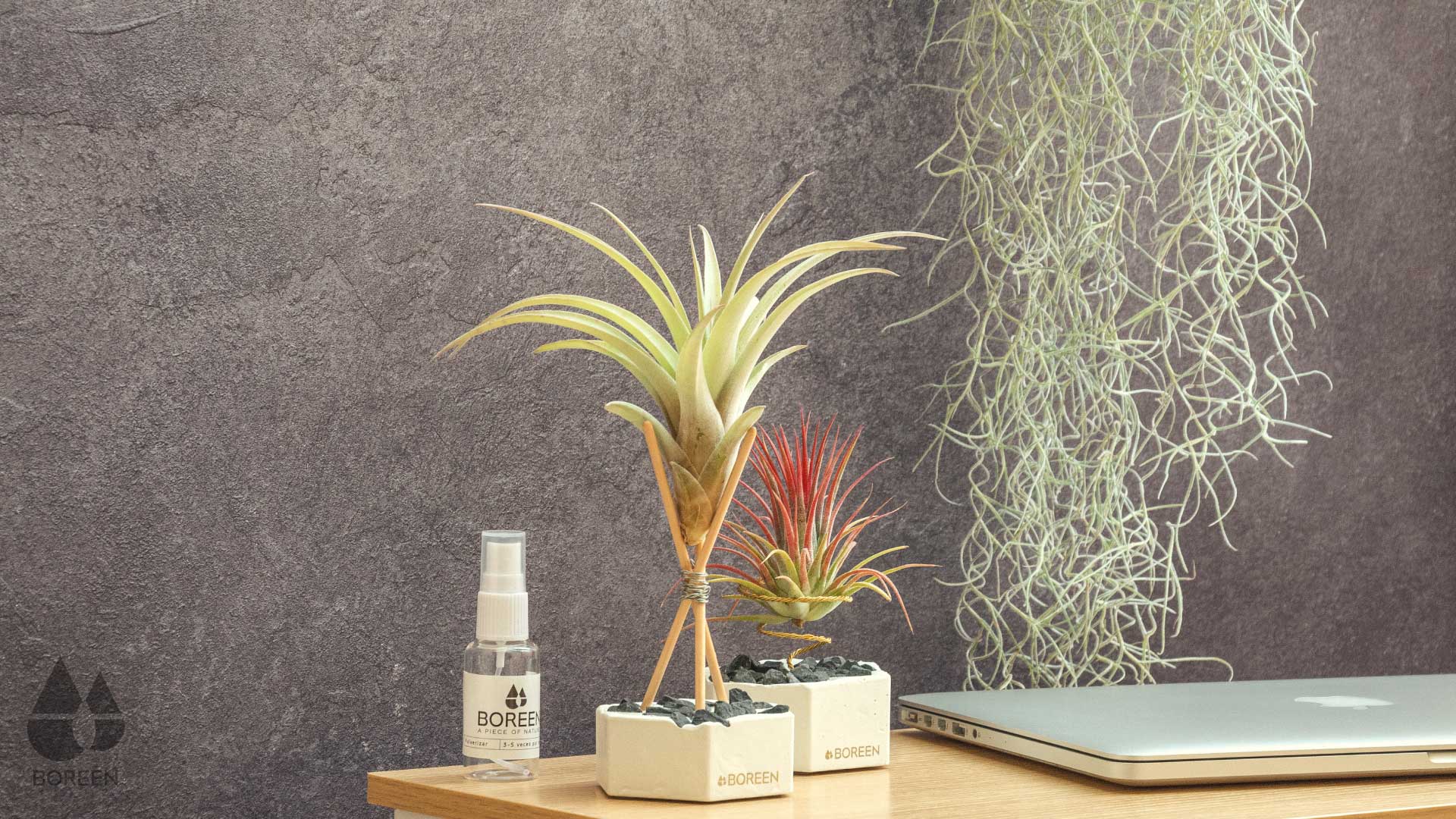